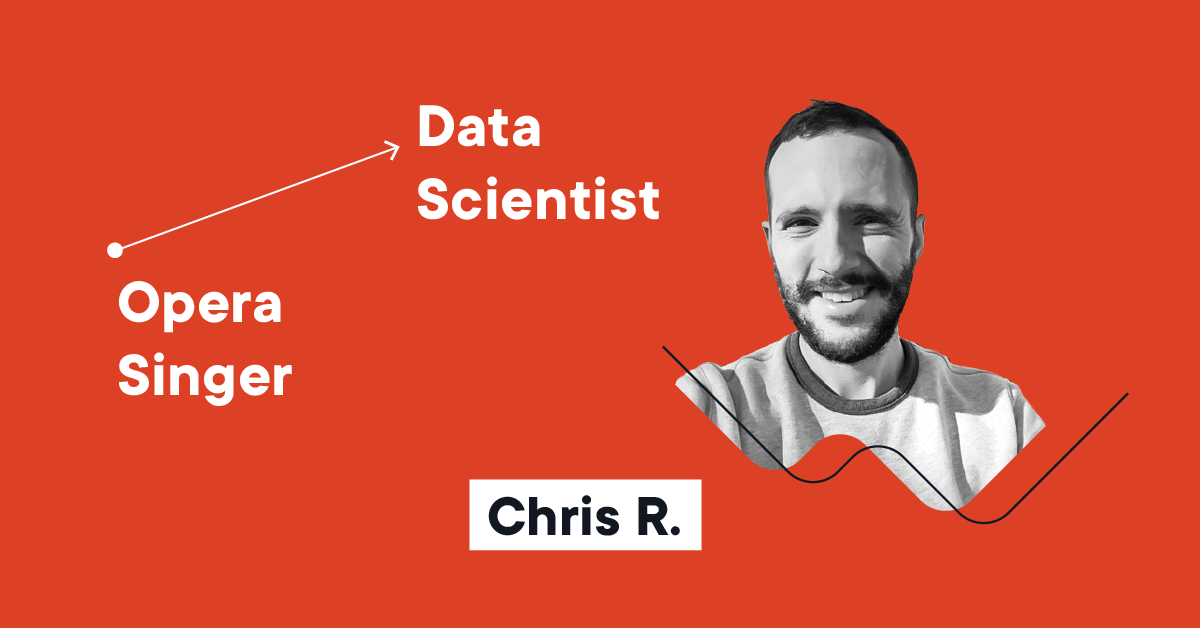 Meet Flatiron School Online Data Science grad Chris Remmel!  He was an Opera Singer and Fundraiser, but eventually followed his passion for technology.  Read How Chris was mega-scrappy about his remote job search in New Hampshire to land a position with Dartmouth College.

You received a bachelors in music from UCLA and then went on to pursue a Masters of Music from Chicago. Tell us about that transition and how you found yourself a professional Opera Singer.

I grew up in a family where academic achievement was critically important. My siblings were both very precocious students and I felt like I needed to do something different in order to distinguish myself. So, when I found that I liked opera, and that I might have some talent for it, I decided that I had found my “thing.” What followed was a solid decade of adventure, traveling constantly, living on peanuts, meeting truly wild personalities and remarkable musicians, and wearing absurd outfits.

Now connect the dots in this story from Opera Singer to Data Science. What was the lightbulb that went off that led to enrolling in Flatiron School?

In my late 20s, I started to feel that opera wasn’t going to be right for me forever. It’s a difficult way to make a living, and I found having to worry about staying constantly vocally fit for auditions and performances was anxiety-inducing. It was time for a change. A stint in fundraising took me to New Hampshire, where I met a wonderful woman and ended up staying. I had never intended for fundraising to be a long-term career, so I started writing small programs in Python and VBA to automate my work, just to see if I liked it. I did!  Additionally, my father was a mathematician and had been telling me about data science for years, hoping that it might catch my interest.

You live in rural New Hampshire and looking for a remote position. This can be a challenging endeavor but you really came up with innovative networking ideas. Tell us how you approached local networking and the ways you utilized both Twitter and Slack channels to advance connections.

I live in a town in New Hampshire with a population of ~13,500 and there just isn’t the same hiring ecosystem here that there would be in a major city. For local networking, I found that Dartmouth College offered “Programming and Pizza” MeetUps. A local friend was also an ex-technology consultant and generously offered to set up lunches for me with some colleagues. 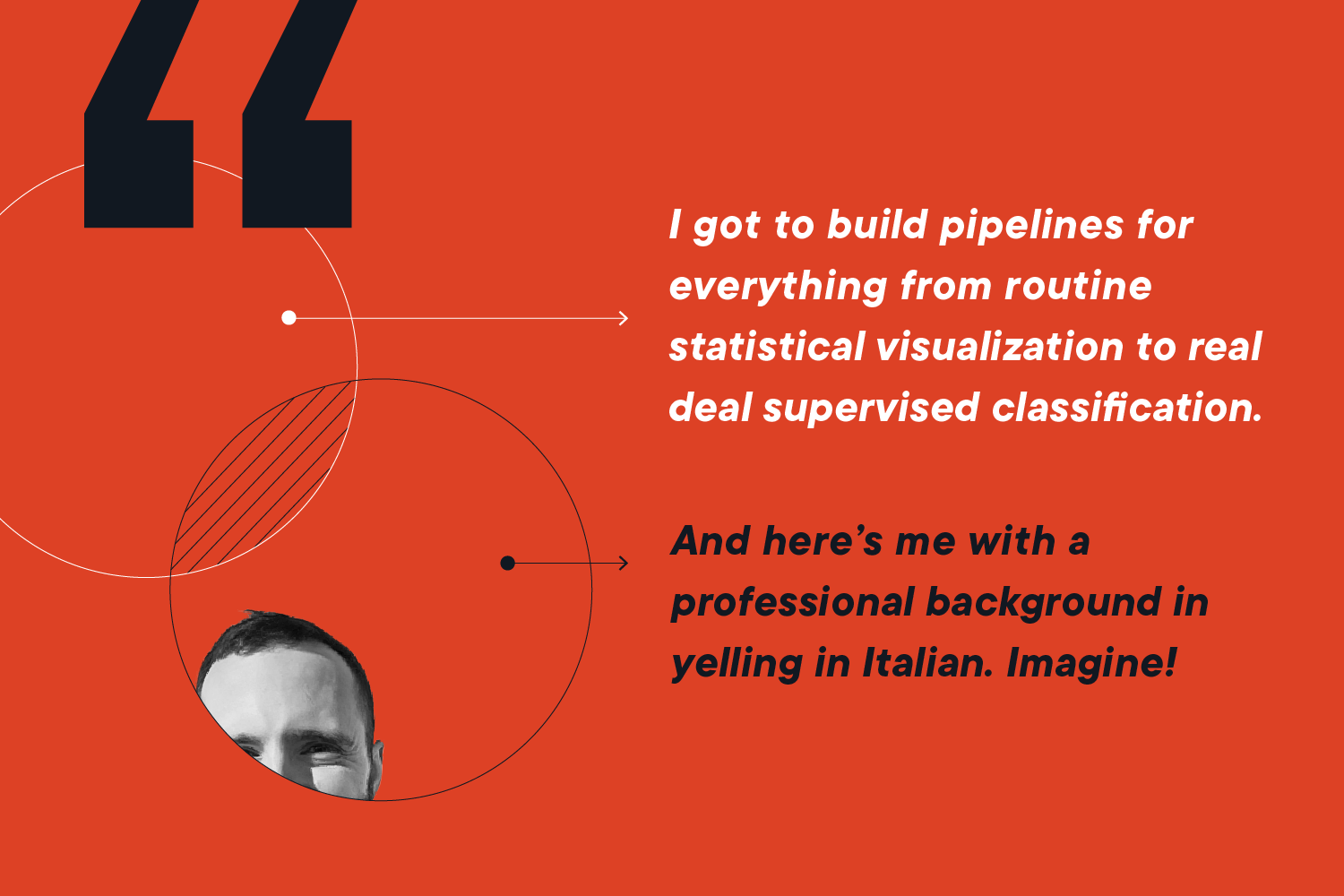 I read you also did a lot of volunteering for different organizations to get your name out there and to “pay it forward” in hopes of possibly securing a position. How has that been beneficial to your job search?

I found volunteering was a great way to build confidence that I had valuable, up-to-date data skills to offer an organization. I’d recommend it to anyone who wants to put what they’ve learned at Flatiron School to work in a practical setting. First, I volunteered at a local investigative newspaper in Vermont. I designed an interactive dashboard for them. Next, I offered free analytics services to Opera North, figuring that working with ticket sales data would be a nice way to tie my experiences together. I helped them visualize their geographic audience. They also convinced me to moonlight in the chorus, which was fun.

How did you secure contract work at Dartmouth?  What has that been like and what do you hope to achieve there?

I was at a party with a bunch of bioengineers (my fiancée's field) and was chatting with one of the senior researchers on the way out, I told her about the deep learning project I’d recently finished as a part of the curriculum. The next week she arranged a time to call me and asked if I would like to build some experience working with some of their datasets. I said yes and that was that! The experience was glorious! Messy experimental data, fresh from their machines! I got to build pipelines for everything from routine statistical visualization to real deal supervised classification. And here’s me with a professional background in yelling in Italian. Imagine! As of August, I’m pleased to announce I’ve accepted a full-time job with the lab!

What’s the biggest takeaway you’ve learned from your journey with Flatiron School? What would you tell students who live in remote area about what you’ve discovered?

There appears to be a burgeoning community around remote work, but it’s not quite so robust yet, and it might take a while to find the right opportunity, be persistent! For the job I ultimately landed, I can’t overstate the role of good fortune, local community, and personal connections played. The main thing I would offer to fellow Flatiron School grads is this:  if you’ve finished the program, you have the knowledge and skills you need to do this. You can do the work – don’t doubt that! We’re always going to need to expand and deepen our abilities, but don’t let impostor syndrome keep you from going after the work you want. On the day that your luck and persistence match up with the right opportunity, trust that you’ll be ready to deliver.

Career coach Matylda Czarnecka reflects on why Chris's job search was so successful:

Chris leveraged his network despite being in a remote location. We strategized ways to make local connections and utilize online platforms to gain traction. He was amazing at putting himself in front of his tech community!