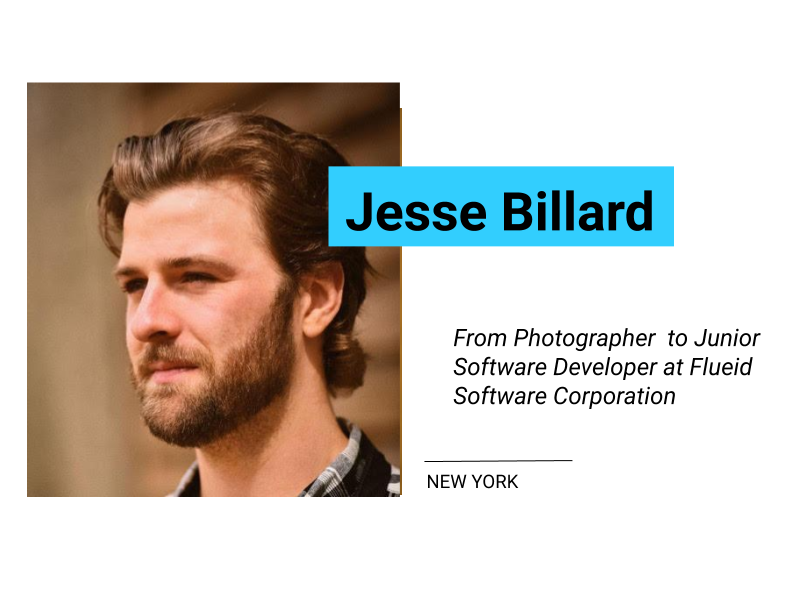 Meet Flatiron grad Jesse Billard!  He graduated from Flatiron School in the fall of 2018 and landed a job in the New York City area. Jesse has always been drawn to career paths that involved a creative eye. He was a photographer, turned videographer, and eventually ventured into the food service industry.  It is with “steadfast determination” (his words!) that he enrolled in Flatiron School’s Software Engineering immersive program. This valued skill set allowed Jesse to merge his work ethic and the creative outlet he has sought his entire professional life. Here Jesse explains his journey and how everyone needs to find a coding groove.

You entered Flatiron School with a background in photography, videography - both very creative and dynamic careers. How was Flatiron different for you than those educational experiences? What was the biggest challenge you had to overcome with an academic experience that has you sitting and thinking and not in constant motion per your other degrees?

Flatiron was different from other educational experiences for two main reasons: The intensity of the pacing and the singularity of the focus. I'd come from the liberal arts path of academics, which I believe has its own merits. But to have a single subject studied at such intensity, was a new experience for me. I found it very rewarding because everyday something new was put on our plate, and it built upon what the previous day had covered. So there was a tremendous sense of growth. The challenge of so much "sitting around in front of a computer" was and still is very real. But everyone has to a find a "coding groove." Everyone has their own pacing/thresholds/methods for getting through something like this successfully. I didn't find my “coding groove” until a couple weeks into the program. To serve up some examples... I learned I need to take a break every 45-60 minutes, get up, move around...and hit the reset button. I also found out that any code I tried to produce after 11 p.m. was certifiable garbage. Something I was stuck on for an hour the night before, I'd figure out in 10 minutes in the morning after a solid night sleep and breakfast. You've got to listen to yourself and discern what your "coding groove" is.

After years of photography and videography, how have your communications skills from your prior career helped you become comfortable talking to others about code?

My previous experience conversing with clients in photo/video helped in the general sense. But I think confidence is one of the biggest aspects of successful networking. Since I had more experience with photo/video, I gained more confidence and that came through in the networking game.

Great segue to my next question about networking! At Flatiron School, we find that networking is one of those skills that you either embrace or run from. What advice do you have for future students to help them overcome those fears, and why is that important?

I think it boils down to confidence, humility, and genuine interest. Good questions come from having a genuine interest in learning about something. So my advice would be this: Cultivate your genuine interest first, then the rest will follow. First comes the self-acceptance of understanding you don’t know everything, the confidence to ask good questions which will result in being truly engaged in these networking environments.

What have your networking efforts led to so far for you?

My current job came from a connection to a past employer. Neither of us were aware of what the other one was doing. But I had reached out to catch up with an old coworker. She mentioned that our old boss was on a new business endeavor and looking for devs. A few interviews/coding challenges later, bada bing bada boom I'm a real life dev! 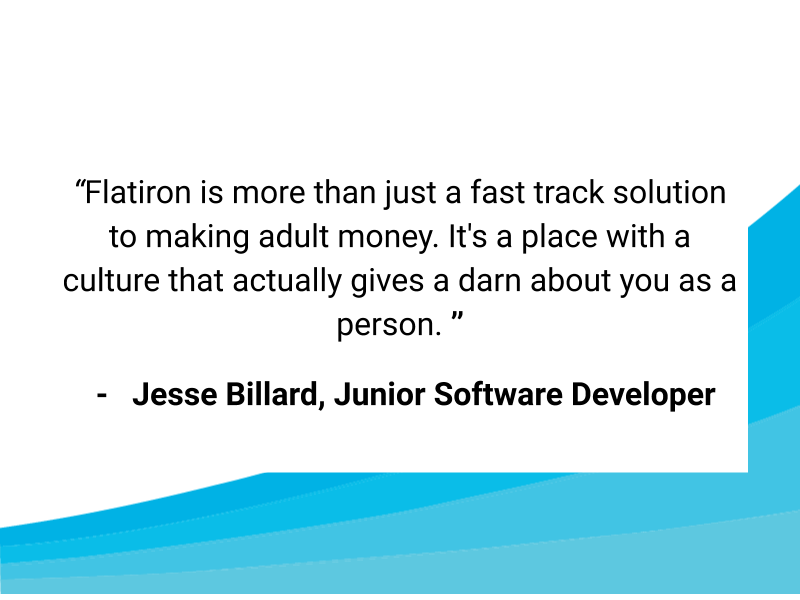 Tell us about your current position and what you are building at Flueid?

Right now my current role as a junior developer at Flueid has me working on a variety of web apps/sites big and small. Being a startup, we're switching gears pretty quickly. The stack I'm using consists of React/Redux/Typescript for front-end and C#/ASP.NET for the back-end. Right now I'm working on a platform that helps title insurance companies manage their accounts and decision making.

I read in your application that you remarked “Flatiron School’s immersive program is a life changing opportunity...you’re not just in the business of teaching people code, you’re in the business of transforming people’s lives for the better.”  This is a really inspirational statement you made before you ever began the program...what ignited this kind of passion for you?

Flatiron School is more than just a fast track solution to making adult money. It's a place with a culture that actually gives a darn about you as a person. That comes from the top down. From leadership to "the trenches,"... Flatiron School = good people!  Before even starting the program, it was evident that Flatiron made people their priority...an assertion I still hold after graduation.

Jesse's career coach Collin Lentz on what made his job search so successful: "Jesse was an enthusiastic networker! This doesn't mean that he always enjoyed networking or always immediately saw the impact but that he consistently committed energy to doing it and remained positive about the value. It was amazing to see and work with as his coach - and even more amazing to watch it work out so well for him!"