Interested in applying to Flatiron School? Schedule a 10 min chat with Admissions 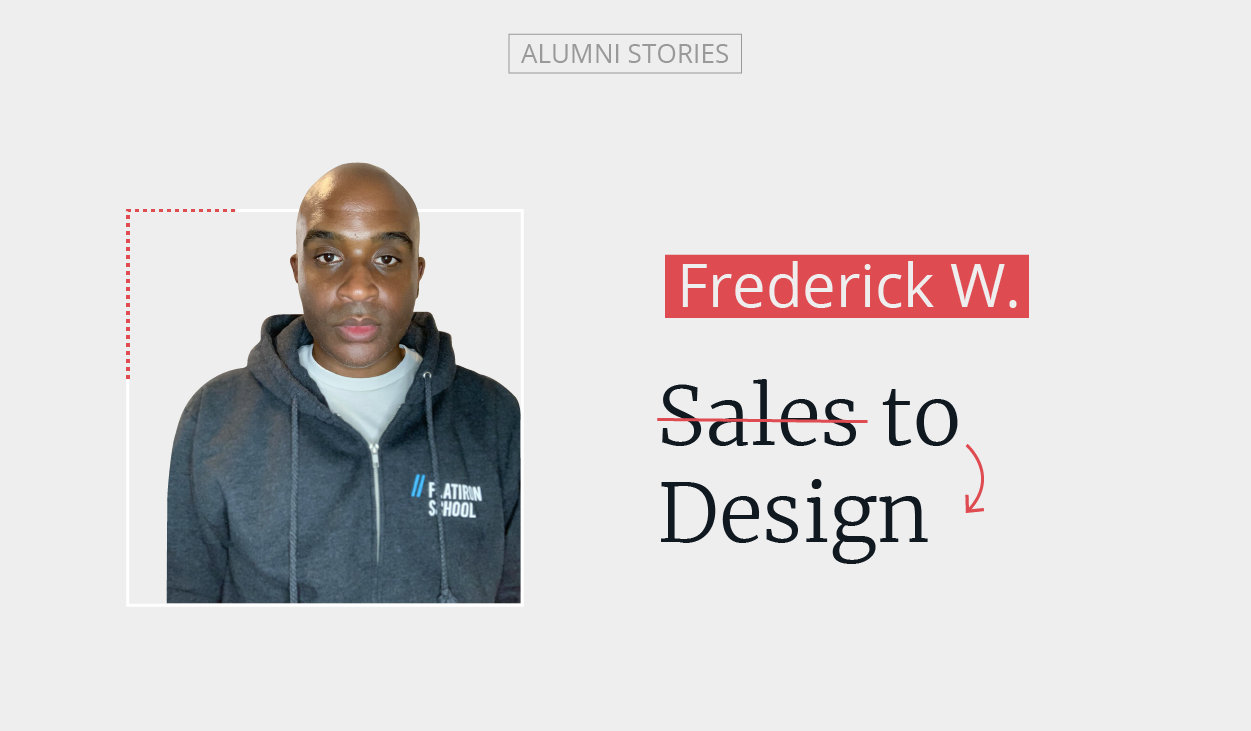 Sometimes, it’s the small, chance occurrences that have the most powerful impacts on our future. For UX/UI designer Fredrick Williams, that opportune moment came when an ad for Flatiron School caught his eye.

Williams, a 20+ year veteran of the sales and marketing industry, was ready for something new, but he wasn’t quite sure what.

“My career wasn’t stagnant, but it also wasn’t growing,” he explained. “I felt like I was working just to work, and leaning on likeability as a salesperson rather than creating assets for a company.” But at 40, he noted, “I thought I had aged out of tech.”

Nevertheless, the Flatiron School ad had planted a seed in his mind. “I had interacted with UX/UI designers before in marketing,” he said. “But I didn’t really understand the role. But I am a natural empath, and I was drawn in by the research aspect.”

Finding His Feet in a New Field

Williams decided to take the leap and quickly threw himself into UX design coursework. “I wanted to be perfect from the beginning, but Flatiron School helped me work through that,” he said. “My instructor never told me what I was doing wrong, he told me what I could do better. There was no room to be sensitive, there was room to grow,” he explained. “It was a journey, and I liked that.”

While he entered the program with an open mind and a strong desire to learn, Williams found that his background and personality made UX design a surprisingly good fit. “I fell in love with UX,” he said. “And I found that UX is for everyone, no matter their age and the community is incredibly supportive.”

That newfound passion quickly paid off. “When I started my job search I immediately got the attention of hiring managers,” Williams said. “I had so many interviews, and it was a smooth process.” Now a Senior UX Design Analyst at Avanade, Williams noted that his commitment to the Flatiron School process made him stand out. “Avanade hired me knowing I didn’t have a lot of experience in the field but that I had the skills and the ability to learn.”

The icing on the cake? Williams is now earning far more than ever before.

Flatiron School didn’t just change Williams’ professional life or his paycheck, though. It also gave him a whole new way to look at himself. “I didn’t come to Flatiron School thinking it would give me anything; I came for the opportunity to grow,” he said. “But it gave me so much. I learned how to be transparent and how to tell my story.”

Even more importantly, Williams’ career pivot reminded him of his own worth. “When I walk down the street I feel confident now,” he said. “When I hear about a friend’s success, I don’t flinch. I know that I can sit at the table with anyone because I have a career.”

As for advice for those considering a career transition, Williams was quick to point to the power of perspective.

With an attitude like that, we can’t wait to see what Williams does next.