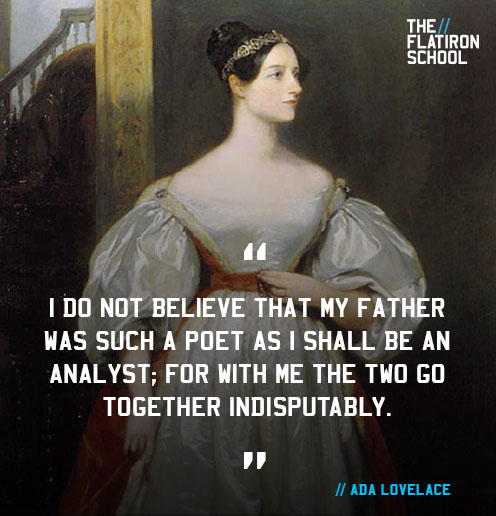 Even though she didn’t have access to the Internet (or, you know, light bulbs, antibiotics, refrigerators, or telephones), we always talk about Ada Lovelace (1815-1852) when we start teaching code at Flatiron School. Here are three reasons why.

1. She was probably the world’s first programmer

In 1833, the cutting edge of computing looked something like this. This machine, called the Analytical Engine, was a mechanical computing device invented (but never actually built) by “the father of the computer” Charles Babbage. Had Babbage ever built the Engine, it would have been possible to “program” it to tabulate functions with punched, operational cards similar to the ones used in the 1940s to program some of the first modern computers. Evidence of Lovelace’s role in computing history exists largely in correspondences with Babbage and in very thorough notes on a translation of a lecture on the Analytical Engine. In these annotations she was kind enough to include a description of an algorithm to calculate Bernoulli numbers. So, if the Analytical Engine was the first general-purpose computer, her notes were the first description of software, and she was the very first programmer.

2. She was the math-whiz daughter of a famous poet

Specifically, she was the only legitimate daughter of Lord Byron—original bad boy of poetry and owner of a very fine turban. People often credit Lovelace’s numbers-heavy education to her mother’s objectively awful relationship with Byron. Actually, Lady Byron loved mathematics even before she was left with such a terrible impression of poets. She felt this supposedly opposite discipline would encourage mental stability and ward off wantonness. In retrospect, it seems like this wasn’t the most successful parenting strategy. Lovelace grew into a brilliant but incredibly complicated adult.

3. The U.S. Department of Defense named a programming language after her

The DoD developed a programming language called Ada (after Lovelace) in the 1970s. In 2014, Ada is not exactly a hot new trend in technology. It is, however, a reliable language still used by the military and in projects where safety is absolutely crucial, like air traffic control and transportation software. So remember to think of Ada Lovelace “the enchantress of numbers” while you are getting on the subway or enjoying a tiny bag of pretzels on a flight. Though widely considered the world’s first programmer, Lovelace’s contribution hasn’t been the most celebrated or well understood—and it certainly doesn’t seem like much when it’s described as notes on a translation of Babbage’s lecture. Just think of it this way: in a moment where computers are omnipresent, it’s easy to take for granted how impossible it must have been not only to understand the Analytical Engine but to imagine its possibility.