When walking to and from class every day at the bottom of Manhattan, I’ve noticed plates of text on the ground with a date and name of a famous person. I didn’t realize what these signs were about until I was walking out of the southmost Bowling Green stop and saw the initial plaque on the ground: 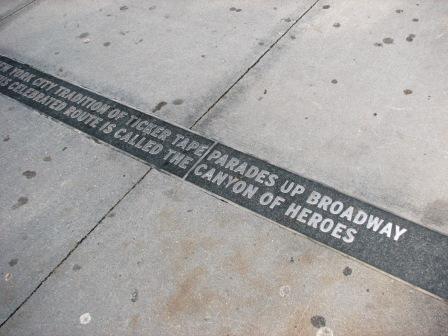 After that, everything clicked! They are commemorating every ticker-tape parade held on Broadway, starting with the first to commemorate the dedication of the Statue of Liberty in 1886.

Before I came to the Flatiron School, I was working as a moving image archivist. I primarily worked with collections of newsreels from the 1920s and 1930s. My job was to catalog them and put them online for access. When I realized what the text on the ground stood for, I immediately ALSO realized that I recognized so many of the names because I had seen some of the actual parades happen (on film)! The text that struck me the most while walking up the street was this one: 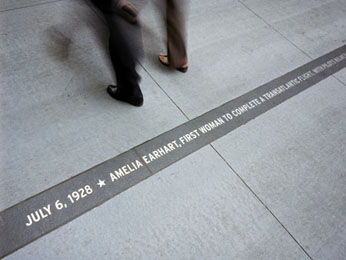 I’ve definitely watched this footage. I ran to the (digital) archive and sure enough, there it was.

Footage identification can be difficult when you don’t have a lead, but this connection was pretty easy to make. I watched the footage, paying attention to the structures of the buildings, and then pulled up Flatiron School’s address on Google Streetview. Boom! It was a total match!

Here is a screencap of the Amelia Earheart ticker-tape parade superimposed on top of Google streetview. 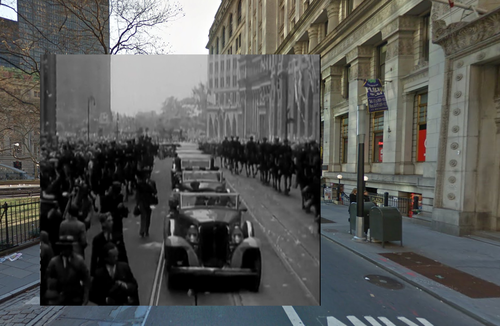 Bonus: The building that the Flatiron School is located in used to be the office building for the White Star Line, which built the RMS Titanic (and many other, sturdier ships). Cool!