What is computer programming?

Computer programming is a process of writing code that defines how an application performs its functions. Computer programs can be as simple as a code to perform basic addition. They can also be as complex as those testing mathematical models for climate and weather forecasting.

Another term that is often used interchangeably with computer programming is coding. While the two are very similar, there are subtle differences between the two. The term "coding" is generally used to refer to just the act of writing code, whereas "programming" is used to describe all the aspects in the development cycle, including the design, coding, testing, and deploying of the application.

‌If you’re looking into the world of programming, it can be a little daunting to pick a journey you’d like to take. On the one hand, you’ve got to choose whether you’d be making system or application software. Then you’ve got to pick one of the many programming languages that are available. It doesn’t end there, you’ve still got to look for the lessons to learn your language of choice.

Whether you’re looking to start a new career, a student trying out new languages, or you just want to learn for fun, you don’t have to go the expensive route. There are plenty of free and low-cost resources to learn coding and computer programming.

What are the top programming languages to learn?

There are lots of languages that you can learn, depending on what you want to specialize in. Different careers each have a set of languages you have to learn to be sufficiently qualified in them. Learning one language is okay, but you’ll need a lot more than one language to be a successful computer programmer.

‌For example, JavaScript is a popular programming language among front-end web developers. However, JavaScript is just one ingredient in the recipe. You’ll still need other languages like HTML and CSS to build a web application. If you’re fixated on one language, you’ll miss out on a lot of opportunities to program.

JavaScript is not only used in front-end web development but also in a majority of other smart devices too, including Android and iPhone devices, smart TVs as well as Apple and Windows computers.

‌Ruby is a scripting language often used for web development. Ruby on Rails is a popular web application platform that you can also dabble into.

‌Python has grown in its usage over the years, partly because it is among the easier languages to learn. It is used in a wide variety of applications, including machine learning and scientific computing.

‌HTML and CSS aren’t technically coding languages, but they make up the backbone of the internet. HTML handles the structure of a website, while CSS takes care of a page’s styling. They are easy languages to learn and are essential for every front-end web developer, alongside JavaScript.

‌Unlike JavaScript, which is used for the website’s front-end, Java is commonly used on the back-end. Android apps are built on Java, as well as back-end web applications.

PHP is used in the back-end of website and desktop applications. 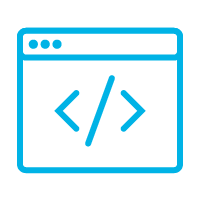 See what you could learn in a software engineering bootcamp. Download the syllabus.

What computer programming jobs can I get?

There are several different routes you can take as a computer programmer. Some of the common jobs in programming are:

‌A front-end developer creates what you see on a website. HTML, CSS, and JavaScript are the languages you’re most likely to begin learning and use on most of your projects. A front-end development job is perfect for creatives who would love to create beautiful yet functional websites.

Remember that posted salaries will vary based on your experience level. Average salaries, in August 2021, according to three different hiring sites:

‌Back-end developers deal with everything that happens behind a working website. They make sure that a website accesses its servers and databases efficiently to display information on the front end. Java, Python, Ruby, and SQL are some of the languages in a back-end developer’s toolkit.

‌Software engineers are the experts in understanding user needs and transforming them into applications to meet these needs. They also fix errors and update software. Some of the languages a software developer uses include Ruby, JavaScript, and HTML/CSS.

How can I start to learn computer programming?

Flatiron School’s Software Engineering program offers many different skills that you can learn and apply to numerous roles in the tech field.

Specifically, Flatiron School offers a full-stack web development experience. This means that you’ll be able to learn to think and build like a computer programmer and a software engineer by working hands-on with both front-end and back-end programming languages. The core programming languages and frameworks that are taught within the software engineering program are HTML, CSS, JavaScript, React, Ruby, SQL, and Rails.

At Flatiron School, you can choose between a full-time schedule—9 hours a day for 15 weeks—or you can choose the Flex schedule which lets you pick between 20, 40, or 60-week courses.

Once you apply, you can work with an admissions representative to choose the right pace and start date that fits best for you and your schedule, so you can start learning to become a computer programmer in a way that makes sense for you.

Flatiron School offers individual career coaching where you can meet weekly with a career coach during your job search — up to 180 days of career coaching included. These career coaches help with everything—from resume reviews to interview preparation—and they help you tell your story to land your first tech job.

With a vast employer network, Flatiron School has built relationships with hiring managers at top companies across the world, creating a robust employer pipeline for many grads. The Employer Partnership team is constantly advocating for grads and helping students get their foot in the door. Through 1-on-1 guidance from the career coaching team and the tried-and-true job-search framework, you’ll be able to gain the skills and support that you need to launch your career as a computer programmer.

Interested in applying to Flatiron School? Schedule a 10 min chat with Admissions
Schedule a Chat

What are frequently asked questions about computer programming?

Can I teach myself computer programming?

Yes, you can teach yourself computer programming. Bootcamps and college degrees may not be what you’re after at the moment. However, there are plenty of methods you can use to learn the required skills to be a programmer. Many self-taught programmers get good jobs, and some even advance to higher positions in the field. It is possible to not only get into computer programming but also be very good at it.

‌While self-study is cheaper and more flexible than other learning methods, it requires a lot of discipline and effort to do it right. You’ll also often have to do your own research to solve problems you may encounter on the way and practice them on your own.

While getting your first job may be a challenge, it gets easier as you grow your experience. Once you’ve done some work and built a portfolio, many companies would value your skills more than formal education, as long as you can showcase these skills well during the hiring process.

What is the difference between coding and programming?

The term "coding" refers simply to the act of writing code: that means writing out a series of instructions in any programming language that the computer can understand in order to solve a particular problem.

Coding is a subset of programming. Programming involves coding, but it also covers many other aspects of the development cycle, including the design, testing, and deploying of the application.

What are some of the best ways to learn programming?

There are countless ways to learn programming on the internet. A quick internet search should give you plenty of interactive coding tutorials, games, and courses you can use to learn whatever language you want. There are also both programming bootcamps and degrees if you wish to have a more intensive mode of learning.

‌You’ll spend more time and money on bootcamps or a formal college degree, but you’ll get the best quality education, motivation, and support. Flatiron School offers plenty of courses and bootcamps, all with fantastic career support to kickstart your programming journey. ‌

Learning how to program isn’t hard, but it is going to take some time and a lot of diligence to master the new skill. Programming requires a lot of learning within a short amount of time. However, once you get the hang of it, it is very rewarding and worth your time.

How much do coding jobs pay?

Computer programming is a very lucrative field to venture into. The pay greatly varies depending on the company you’re employed at, your skill level, and the languages you’re proficient in. For example, a JavaScript can coder make an average of $107,529*, a Python developer can earn about $112,899*, and a C developer gets $100,629* a year, according to Ziprecruiter. On average, a general computer programmer earns around $65,000 a year*.

What is computer programming?

Is computer programming a good career?

Are computer programming bootcamps worth it?

Computer programming bootcamps are worth it if you want to learn new skills fairly quickly so you can kick start a new career. Bootcamps are more cost effective and time efficient than going back to university.

What computer programming language should I learn first?

JavaScript is an excellent choice for your first programming language because it is most commonly used for front-end development and can also be utilized for back-end applications.

How do I learn computer programming?

What computer programming language is most in demand?

JavaScript is considered the most in-demand programming language because it is commonly used for front-end development, but can also be used to create backend applications.